Research: Women Score Higher Than Men in Most Leadership Skills

The Global School for Social Leaders

Enjoy the reading and join us on:

Hello! you landed to The Global School for Social Leaders page; We are multi-awarded NGO specialized in holistic & disruptive education for purpose-driven leaders & innovators. You can join us on:

Enjoy the reading and your day 🙂

For the first time in history, a major political party in the United States has several women who have declared their candidacy to be their party’s presidential nominee. But TV pundits have been questioning whether, despite the progress indicated by the huge influx of women elected into Congress last fall, the U.S. is ever going to elect a woman to the country’s highest leadership position.

This is baffling to us, especially in light of what we see in our corporate research. In two articles from 2012 we discussed findings from our analysis of 360-degree reviews that women in leadership positions were perceived as being every bit as effective as men. In fact, while the differences were not huge, women scored at a statistically significantly higher level than men on the vast majority of leadership competencies we measured.

We recently updated that research, again looking at our database of 360-degree reviews in which we ask individuals to rate each leaders’ effectiveness overall and to judge how strong they are on specific competencies, and had similar findings: that women in leadership positions are perceived just as — if not more — competent as their male counterparts.

Still, the disturbing fact is that the percentage of women in senior leadership roles in businesses has remained relatively steady since we conducted our original research. Only 4.9% of Fortune 500 CEOs and 2% of S&P 500 CEOs are women. And those numbers are declining globally.

There are of course many factors that contribute to this dearth of women at senior levels. For centuries, there have been broad, cultural biases against women and stereotypes die slowly. People have long believed that many women elect not to aspire to the highest ranks of the organization and take themselves out of the running (though recent research disputes that). Lots of research has shown that unconscious bias places a significant role in hiring and promotion decisions, which also contributes to the lower number of women in key positions.

Our current data presents even more compelling evidence that this bias is incorrect and unwarranted. Women are perceived by their managers — particularly their male managers — to be slightly more effective than men at every hierarchical level and in virtually every functional area of the organization. That includes the traditional male bastions of IT, operations, and legal.

As you can see in the chart below, women were rated as excelling in taking initiative, acting with resilience, practicing self-development, driving for results, and displaying high integrity and honesty. In fact, they were thought to be more effective in 84% of the competencies that we most frequently measure.

According to our updated data, men were rated as being better on two capabilities —”develops strategic perspective” and “technical or professional expertise,” which were the same capabilities where they earned higher ratings in our original research as well.

Women are rated better than men on key leadership capabilities

According to an analysis of thousands of 360-degree reviews, women outscored men on 17 of the 19 capabilities that differentiate excellent leaders from average or poor ones.

Interestingly, our data shows that when women are asked to assess themselves, they are not as generous in their ratings. In the last few years we created a self-assessment that measures, among other things, confidence. We’ve been collecting data since 2016 (from 3,876 men and 4,779 women so far) on levels of confidence leaders have in themselves over their careers and we saw some interesting trends.

According to our data, men gain just 8.5 percentile points in confidence from age 25 to their 60+ years. Women, on the other hand, gain 29 percentile points. One note: This is what we see in our data though we recognize that there are studies that come to different conclusions on whether women truly lack confidence at early stages in their career. 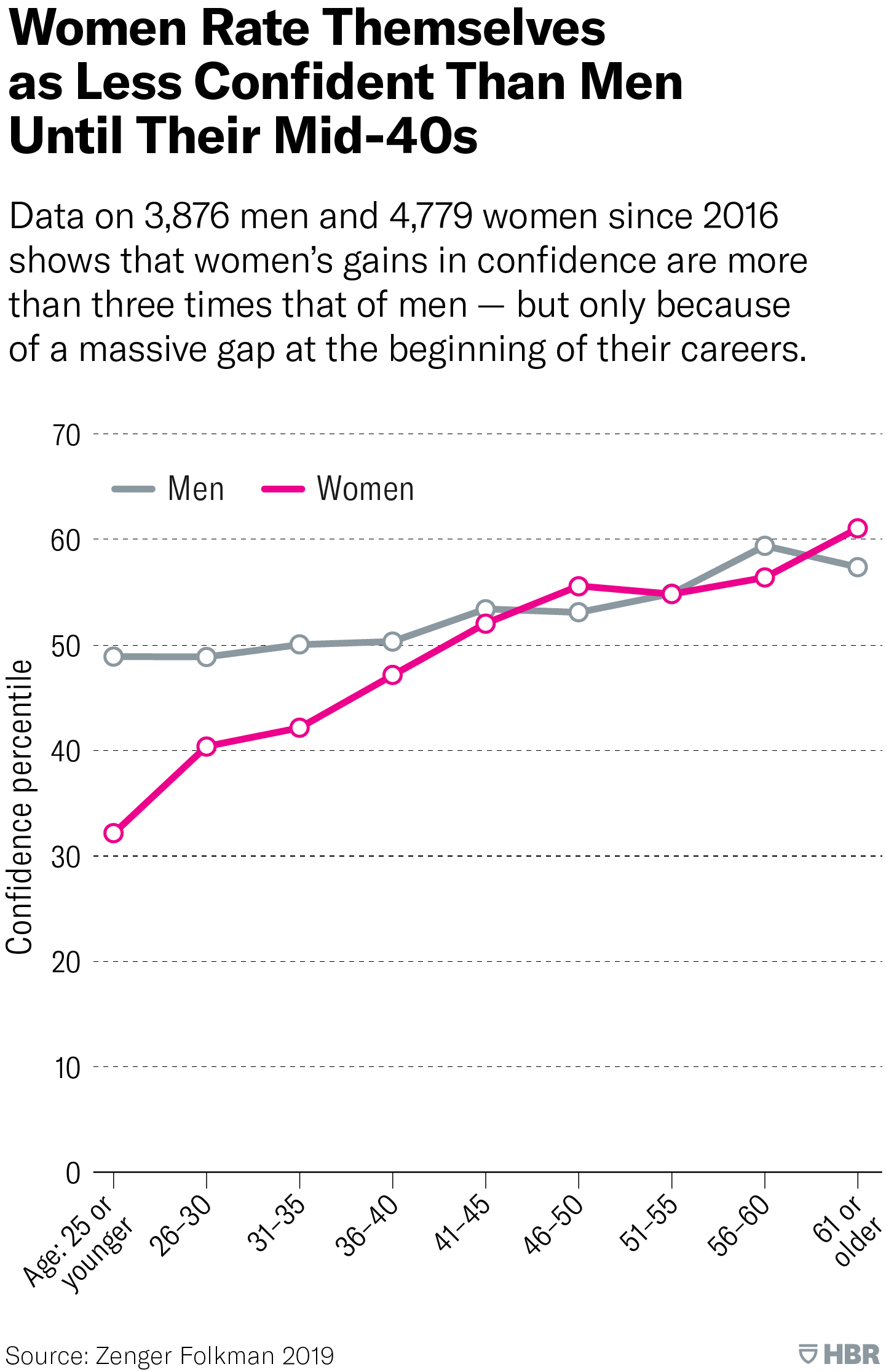 These findings dovetail with other research that shows women are less likely to apply for jobs unless they are confident they meet most of the listed qualifications. A man and woman with identical credentials, who both lack experience for a higher level position, come to different conclusions about being prepared for the promotion.

The man is more inclined to assume that he can learn what he’s missing, while in the new job. He says to himself, “I am close enough.”  The woman is inclined to be more wary, and less willing to step up in that circumstance.

It’s possible that these lower levels of confidence at younger ages could motivate women to take more initiative, be more resilient, and to be more receptive to feedback from others, which in turn makes them more effective leaders in the long run.

We see a similar trend in women’s perceptions of their overall leadership effectiveness, with their rating rising as they get older. This data is from a study that includes 40,184 men and 22,600 women and measures the overall effectiveness rating of males and females on 49 unique behaviors that predict a leaders effectiveness.

Again, women at younger ages rate themselves significantly lower than men but their ratings climb — and eventually supersede those of men — as they get older. 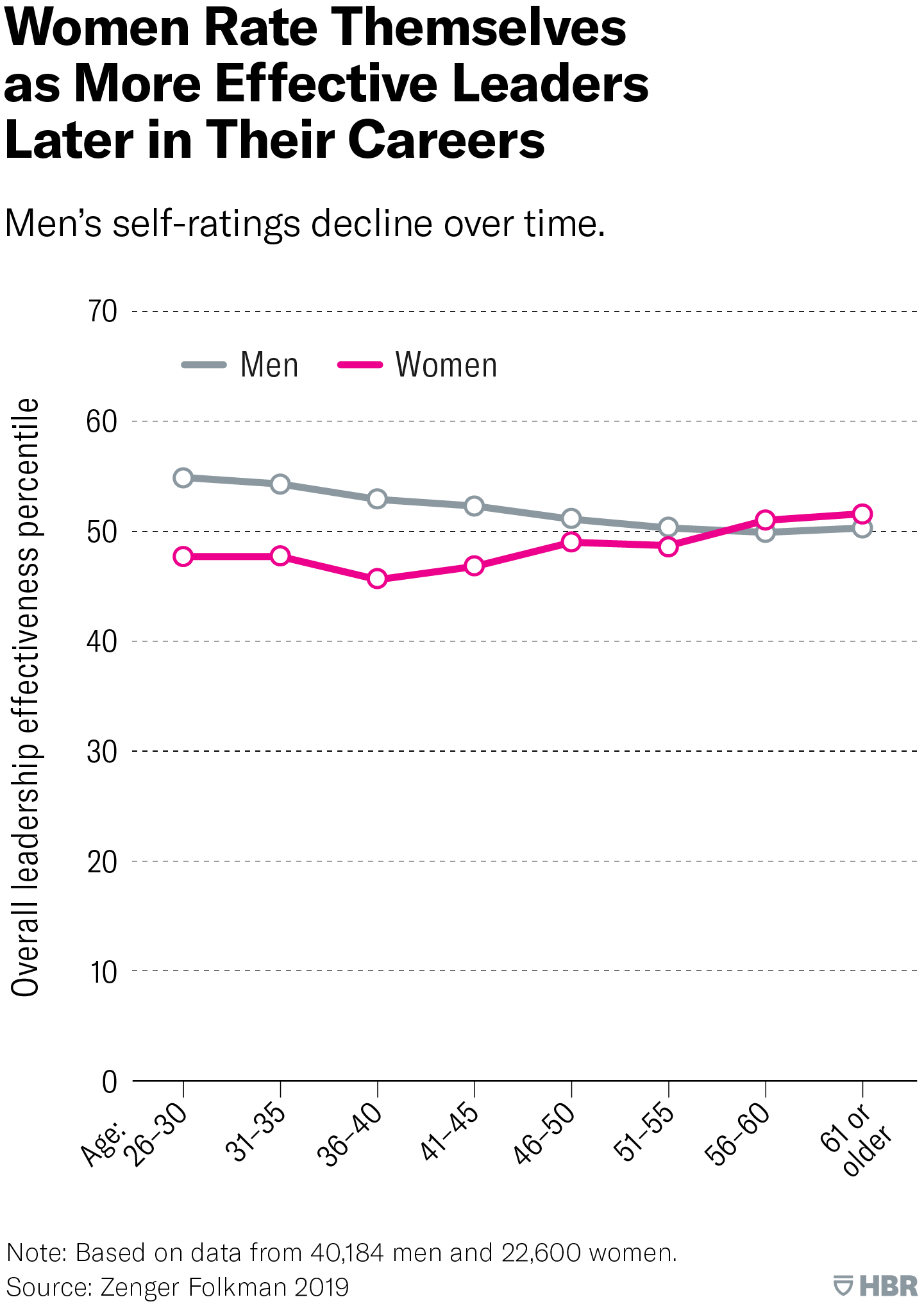 This data continues to reinforce our observations from our previous research — women make highly competent leaders, according to those who work most closely with them — and what’s holding them back is not lack of capability but a dearth of opportunity. When given those opportunities, women are just as likely to succeed in higher level positions as men.

Keep in mind that our data is mostly perceptions of current and past behavior and performance. That’s different than a promotional decision that involves movement to a higher position and involves taking a bigger risk. If 96 out of 100 people currently serving in comparable positions are male, and you are making the decision about who to promote, and you have a highly qualified female and a highly qualified male, what are you inclined to do? It may seem safer to choose the man.

Leaders need to take a hard look at what gets in the way of promoting women in their organizations. Clearly, the unconscious bias that women don’t belong in senior level positions plays a big role. It’s imperative that organizations change the way they make hiring and promotion decisions and ensure that eligible women are given serious consideration.

Those making those decisions need to pause and ask, “Are we succumbing to unconscious bias? Are we automatically giving the nod to a man when there’s an equally competent woman?” And, as our data on confidence shows, there’s a need for organizations to give more encouragement to women. Leaders can assure them of their competence and encourage them to seek promotions earlier in their careers.

Is the CEO of Zenger/Folkman, a leadership development consultancy.

← Prev: The Case for Job/Career Jumpers Next: WORLD LOCALIZATION DAY →

Any cookies that may not be particularly necessary for the website to function and is used specifically to collect user personal data via analytics, ads, other embedded contents are termed as non-necessary cookies. It is mandatory to procure user consent prior to running these cookies on your website.